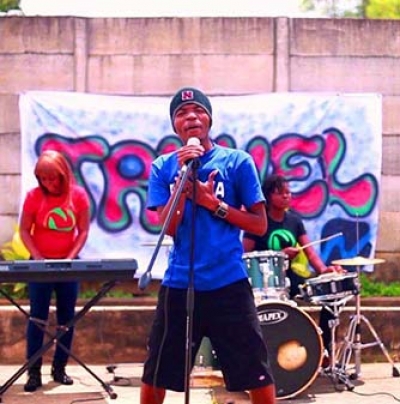 Truemale Bonnface (born 03 April 1983), better known by the name Trumel, is Malawian dancehall artist signed to Nde’feyo Music. Growing up with his mother, as his father spent much of his time in Zimbabwe, life was not easy for the young Truemale, but realising the gift and potential he had, his mother and late aunt encouraged him nurture his talent in church where he used to sing every Saturday, being a member of the Seventh Day Adventist Church and his passion for music grew stronger.

He started reading musical books and composing songs, with his first instrument being a self-made gallon guitar. Loving reggae music and blues, most of all, Truemale spent much of his time listening to well-known artists then, among them reggae legend Bob Marley. At the age of 20, he decided to take music as a career and he has grown to be one of the most talented dancehall singers, song-writers and producers in Malawi.

Apart from old-timers and the crop of modern dancehall artists such as Gyptian and Jah Cure, Trumel also gets his inspiration from the environment that he has grown in and lives, having experienced life in both rural and urban Malawi, the artist says he has got so much to share with the people, and on the other hand, gives him a positive punch, personally and musically. He has been strong enough to stand and come up with compelling compositions such as Rosie, his first song to go on radio in the year 2009. The second recording was Tsalani, released in 2011. Trumel’s hit track is the 2011 Let it go, which has made tremendous airplay and requests on local radios. His music has also been featured on BBC Radio.

In 2013 he released a mixtape titled ‘Step Ahead’ which much acclaim. Currently the artist is working on his debut album to be released under Nde’feyo Music. He has since released a music video for ‘Party(lalala). Reggae is my veins and Chocolate Sauce are the first singles to be released from the most anticipated album of 2014. Trumel has shared local and international act such like 2face Idibia.